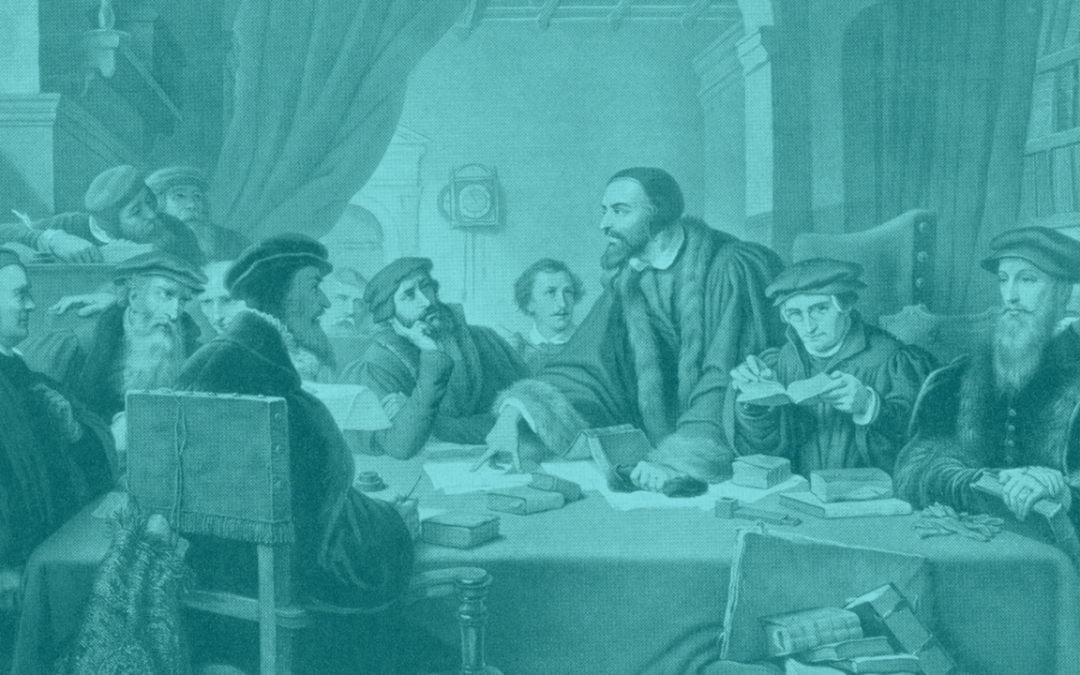 The Institutes of the Christian Religion, by John Calvin, is sometimes vague when it comes to theology proper. This is not to say Calvin had an underdeveloped doctrine of God. It is only to say that the doctrine of God was largely uncontested in his day (with the exception of some individuals, like Servetus), and so he most likely did not feel the need to invoke either language or length in treatment that may be expected in the Puritan age (corresponding with the rise of Socinianism). The question of source-material has also been asked concerning Calvin’s access or use of older sources. He does make brief, ultra-precise statements at times. For example, he says in the outline for Book I, ch. 13, “In this one essence are three persons, yet so that neither is there a triple God, nor is the simple essence of God divided. Meaning of the word Person in this discussion. Three hypostases in God, or the essence of God.”[1]

The Institutes of the Christian Religion

He further elaborates on the doctrine of the Trinity by saying, “While he proclaims his unity, he distinctly sets it before us as existing in three persons. These we must hold, unless the bare and empty name of Deity merely is to flutter in our brain without any genuine knowledge. Moreover, lest anyone should dream of a threefold God, or think that the simple essence is divided by the three Persons, we must here seek a brief and easy definition which may effectually guard us from error.”[2] Furthermore, he states, “When we profess to believe in one God, by the name God is understood the one simple essence, comprehending three persons or hypostases; and, accordingly, whenever the name of God is used indefinitely, the Son and Spirit, not less than the Father, is meant.”[3]

Speaking to the importance of understanding Father, Son, and Spirit to be identical to the divine essence, he writes, “If they reply that the Father, while essentiating, still remains the only God, being the possessor of the essence, then Christ will be a figurative God, one in name or semblance only, and not in reality, because no property can be more peculiar to God than essence, according to the words, ‘I AM has sent me unto you,’ (Ex. 3:4.).”[4] Calvin also teaches that the enumeration of God’s attributes or perfections are enumerated only in our conception of God. He writes, “in the enumeration of his perfections, he is described not as he is in himself, but in relation to us, in order that our acknowledgement of him may be more a vivid actual impression than empty visionary speculation.”[5] This may be taken to imply the oneness of God’s attributes, or their identity with the divine essence.

He provides support for the doctrine of the Trinity, against “calumnies,” from Irenaeus, Tertullian, and even the “acknowledged doctors of the church.”[6] For Calvin, though there is controversy surrounding his understanding of the Son as autotheos, the doctrine of the Trinity is basically stated, “by the name God is understood the one simple essence, comprehending three persons or hypostases…” The one God is the three Persons, Father, Son, Spirit. He further denies subordinationism when he writes, “John, declaring that he is the true God, has no idea of placing him beneath the Father in a subordinate rank of divinity. I wonder what these fabricators of new gods mean, when they confess that Christ is truly God, and yet exclude him from the godhead of the Father, as if there could be any true God but the one God, or as if transfused divinity were not a mere modern fiction.”[7] Calvin rightly indicates that he considers subordination in God to imply there is lesser and greater distinctions in the divine essence itself, a figment contrary to the Athanasian Creed on its face. He writes, “If they grant that the Son is God, but only in subordination to the Father, the essence which in the Father is unformed and unbegotten will in him be formed and begotten.”[8] He further explains, “We must hold, therefore, that as often as Christ, in the character of Mediator, addresses the Father, he, under the term God, includes his own divinity also.”[9]

In refuting the notion of manifold wills in God, Calvin writes, “These objections originate in a spirit of pride and blasphemy. Objection, that there must be two contrary wills in God, refuted. Why the one simple will of God seems to us as if it were manifold.”[10]

Now that Calvin’s systematics have been explored, albeit in a very limited and brief fashion, we might move on to his exegetical theology, asking the question, “How did he get there?” It goes without saying that we can by no means exhaust this question. This brief look is only intended to peak interest in the reader. Before we observe his commentary on Exodus 3:14, I should mention that Calvin has a surprisingly robust natural theology, and so was not shy to employ philosophical help in his articulation of revealed truth. For this reason, we should take for granted that Calvin employed such help in his Trinitarian theology through terms like “essence” and “nature.” He further allows for some analogy in nature to help cast light upon the doctrine of the Trinity, but this is an article unto itself.

Very early in his exposition of Exodus 3:14, he writes, “This is very plain, that God attributes to himself alone divine glory, because he is self-existent and therefore eternal; and thus gives being and existence to every creature.”[11] This shows us that Calvin had aseity in mind early on in his exposition. He joins in near universal agreement with the orthodox interpretive tradition as to its meaning of Exodus 3:14, that God is a se or self-existent. God is Being in Himself, He exists by His very essence. Therefore, He is the One who gives being to all contingent things, i.e. creatures. His next comment is crucial, but it follows seamlessly from what has already been said, “Nor does he predicate of himself anything common, or shared by others; but he claims for himself eternity as peculiar to God alone, in order that he may be honored according to his dignity.”[12] Here, Calvin denies the notion of participation in God, which is a notion to be understood in light of the limitation of act by potency.[13]

If God is His own “to be,” it follows God does not have love or have justice; He is identical with His divine attributes. God is love, God is justice, etc. If He were not, He would participate in these perfections, as if they were perfections distinguishable from the single, simple, and perfect essence of God. As it is, however, God does not participate, God just is. Conversely, creatures have love, they have justice and are not identified with those perfections. To the extent a creature is loving or just, that creature participates in those perfections which God Himself is. He is an image, reflection, imitator of the divine Being (imago Dei).

He goes on to list the incomprehensibility of God, which implies the need for analogical language in our God-talk, “Therefore, immediately afterwards, contrary to grammatical usage, he used the same verb in the first person as a substantive, annexing it to a verb in the third person; that our minds may be filled with admiration as often as his incomprehensible essence is mentioned.”[14] Elsewhere, Calvin puts analogical predicative revelation in terms of divine “lisping.” He says, “The Anthropomorphites also, who dreamed of a corporeal God, because mouth, ears, eyes, hands, and feet, are often ascribed to him in Scripture, are easily refuted. For who is so devoid of intellect as not to understand that God, in so speaking, lisps with us as nurses are wont to do with little children?”[15] And, “Such modes of expression, therefore, do not so much express what kind of a being God is, as accommodate the knowledge of him to our feebleness. In doing so, he must, of course, stoop far below his proper height.”[16] Such language is nothing less than allusion to analogical predication.

A maxim which gained popularity during the time of the Reformation was finitum non capax infiniti, the finite cannot comprehend the infinite. It was a phrase the substance of which had been assumed long before. The infinite essence of God cannot be communicated directly to finite creatures. What can be communicated to finite creatures must, of necessity, be finite. Thus, the need for analogical predication, and even for understanding the analogical character of Scripture (with regard to God), became inestimably important in theology. The infinite God communicates to the finite creature through means it can understand, analogically. Analogical language is language of similarity through either attribution, metaphor, or proportionality. The latter is here in view.

Calvin then goes on to apparently affirm some form of Christian Platonism when he writes, “But although philosophers discourse in grand terms of this eternity, and Plato constantly affirms that God is peculiarly to on (the Being); yet they do not wisely and properly apply this title, viz., that this one and only Being of God absorbs all imaginable essences…”[17] Interestingly, this is exactly what Christians, influenced by the Neo-Platonists, would have done. Plato could account neither for the reality of the world of experience, nor for its meaningful correspondence with the forms or essences in the world of ideas. Aristotle first brought this criticism. But Christian theology caught on through the likes of Augustine, Dionysius, and Thomas Aquinas. Whereas Plato’s forms apparently subsisted in themselves without any explanatory principle preceding them, Christianity understood those forms to be found (in some way) in God.[18]

Calvin then mentions providence, the folly of dividing the deity through impious imagination, and then says, “Wherefore, in order rightly to apprehend the one God, we must first know, that all things in heaven and earth derive at His will their essence, or subsistence from One, who only truly is.”[19] In order to know God rightly, in other words, one must know God as Cause of all things. This article of knowledge Calvin appears to place in the beginning of his Institutes, prior to reaching the doctrine of Scripture.[20] Implies in his order is that such a knowledge of God is gained through nature rather than by faith, and thus might be included within natural theology.

Calvin concludes his exposition on Exodus 3:14 by considering how God, in His appearance to Moses, “teaches him that He alone is worthy of the most holy name (Jehovah),” and, “that Moses may have no doubt of overcoming all things under his guidance.”[21]

This is, by no means, an exhaustive commentary on Calvin’s thought concerning theology proper. But, at minimum, we should be able to conclude from the evidence presented that Calvin held to the classical (sometimes called the “over-extended”) formulation of divine simplicity. The Persons—Father, Son, and Spirit—just are the one divine essence. There is only one will in God. And there is no subordination in God. Leaving aside the accidental issues which may throw Calvin into dispute, e.g. the autothean controversy, it may be safely concluded that Calvin held to a classical doctrine of God which departed neither from the Scriptures, the creeds of the ancient church, nor the more developed theology proper of the medievals, such as Aquinas. Calvin himself thinks of his trinitarianism as being in line with all the “acknowledged doctors of the church,” of which Aquinas was knowingly a part. There is very clearly, therefore, a continuity represented in Calvin with regard to the doctrine of God, not only with his medieval predecessors but also with his successors, the Reformed Scholastic Calvinists.

[18] Craig Carter discusses “Christian Platonism” in his book, Interpreting Scripture with the Great Tradition. One may also find help in Louis Markos’ book, From Plato to Christ.