REVIEW: The Letter and Spirit of Biblical Interpretation 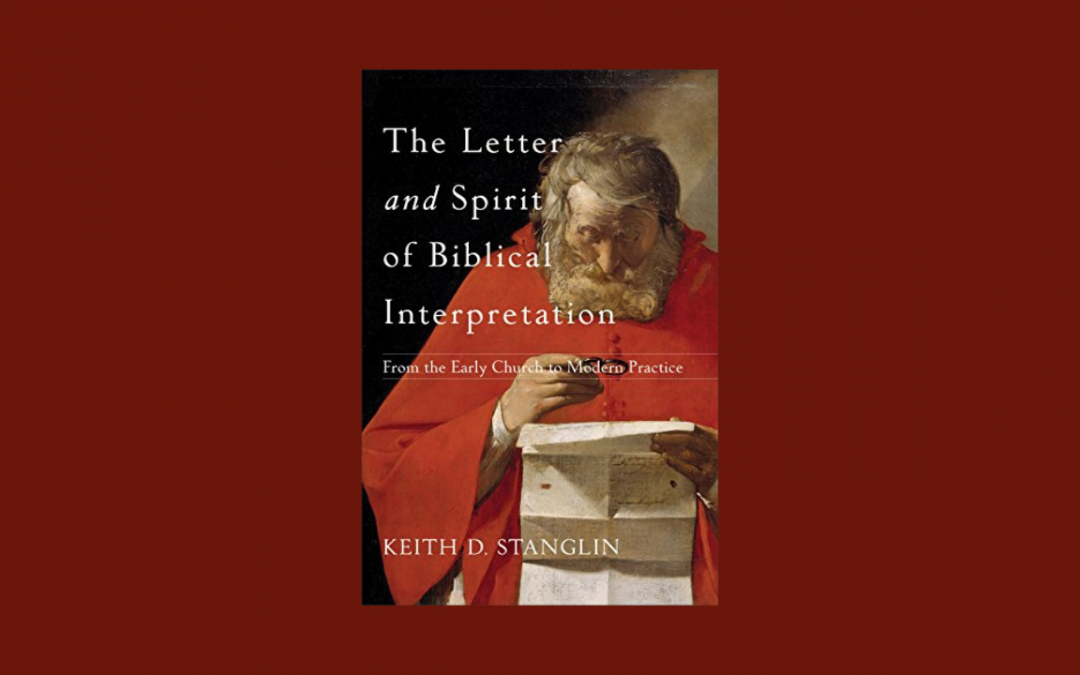 The below is a book review article submitted in fulfillment of a recent hermeneutics course at International Reformed Baptist Seminary. The Letter and Spirit of Biblical Interpretation is authored by Keith D. Stanglin.

Hatched within the cradle of Enlightenment skepticism is the obligatory and incessant quest for certainty. Over the last few centuries, science has undergone a mutilating transformation only to appear now in the form of a proud scientism. Everything is about process, a process that promises certainty. Rules rule the day. System and method, if correctly followed, will automatically garner the right conclusions. The employment of method and the proper outflow of process are givens within the context of a chemical laboratory or doctor’s office. But what happens when methods proper to the natural sciences are imposed upon higher sciences, such as theology or philosophy? The 19th and 20th centuries have especially produced the same air of obligatory certainty within the biblical-exegetical community. As Keith Stanglin puts it, “If the interpreter would simply approach the Bible in the same objective, reasonable way that the scientist approached nature, then, as long as enough information is available, the single message of any passage could be discerned.” (179)

Such an approach to the science of exegetical theology leaves one with the impression that biblical interpretation is a shut case. All the Bible reader must do is follow the correct method. Stanglin’s contribution to the retrieval of historical exegesis in The Letter and Spirit of Biblical Interpretation is an asset precisely because it shows that such an approach to Scripture is not only a-historical, but also categorically erroneous.

The majority of Stanglin’s volume (19-187) takes the shape of historical survey. Readers entering this area of study for the first time will quickly discover that the modern era of biblical studies has not been entirely transparent about its own place within the historical timeline of exegetical practice. In the second chapter, which deals with “Earliest Christian Exegesis,” Stanglin writes:

…it is important to get the hermeneutical priority clear. Although the New Testament writers were already recipients of a scriptural tradition, they began their interpretation of Scripture with assumptions outside of Scripture—namely, the revelation of Christ, their witness of the Christ event. (21)

Already, those trained in the modernist interpretive tradition will likely start to become uneasy. But in chapter six, Stanglin helps us to understand the assumptions most probably causing the uneasiness. Speaking of Alexander Campbell, he writes, “He was influenced by a Baconian inductive approach (that is, the scientific method), and like most Enlightenment thinkers he assumed that this was the most reliable way to truth and knowledge in human endeavour.” (170)

In chapter three, Stanglin moves from the first two centuries of Christian biblical exegesis to the third century, the beginning of what he called “Later patristic Exegesis.” (47) This chapter spends a large amount of space surveying Origen and his surrounding controversy. Origen was controversial in his own day largely due to his supposed over-allegorization of the biblical text. However, as Stanglin shows, Origen needs to be carefully qualified. For example, some of Origen’s exegetical conclusions were taken as allegory though today they would be understood as the literal interpretation of the text. Stanglin writes:

Porphyry’s contemporary, Methodius of Olympus, opposed Origen’s interpretation of the dry bones story in Ezekiel 37. Methodius insisted that the story is about the future, bodily resurrection of the dead, and he accused Origen of “allegorizing”… the text. Origen’s allegedly allegorical interpretation, by the way, took the story to be about the restoration of Israel from exile, which, ironically, happens to be the “literal” interpretation now preferred by modern commentators. (49)

In the latter portion of the same chapter, Stanglin very helpfully surveys the Antiochene and Alexandrian schools of interpretational thought. He shows that the Antiochene and Alexandrian schools were not fundamentally opposed along literal versus spiritual party lines. Rather, Stanglin demonstrates that both schools maintain the theoria, or the fuller sense of Scripture beyond the historical meaning. The crux of the divide between both schools rested within their Christology. And it wasn’t as if they had principally different Christologies either, they did not; but they had different emphases within the same Christological conviction. Quoting Frances Young, Stanglin clarifies the divide, “Alexandrian and Antiochene is not spiritual versus literal, for both schools knew that ‘the wording of the Bible carried deeper meanings and that the immediate sense or reference pointed beyond itself.’” (68)

Whereas the Antiochene school has been heralded as the ancient champion of the historical-critical model of exegesis by moderns, Stanglin sets the record straight by concluding, “the Antiochene school of interpretation has more in common with Origen than it does with modern, historical-critical exegesis.” (68) And indeed, given Stanglin’s observation of the Antiochene maintenance of the theoria, such a conclusion seems entirely warranted. Contrary to the modern scientific mindset where rightly following the correct method automatically yields true exegetical conclusions, Stanglin finishes chapter three with the spirit and sentiment of the ancient interpreters when he says, “Biblical interpretation calls for humility, a desire to be formed morally, willingness to listen, and openness to spiritual illumination and understanding.” (76)

In chapter four, medieval exegesis is the object of author’s historical survey. He begins with Augustine (4th c.), who carries the necessity of virtue into exegesis following those who preceded him. For Augustine, it wasn’t only about methods. Morals were also necessary. Stanglin, quoting Augustine, writes, “So anyone who thinks that he has understood the divine scriptures or any part of them, but cannot by his understanding build up this double love of God and neighbor, has not yet succeeded in understanding them.” (82)

Augustine does not imbibe the modern assumption of methodical automation. Rather, moral concern, especially as it appears in a faith-induced humility, is of prime importance. The same could be said of John Cassian of whom Stanglin notes, “that spiritual maturity and understanding are prerequisites for the right interpretation and application of Scripture.” (93) Cassian (4th-5th c.), though not the inventor of it, further develops what is called the quadriga, or the fourfold sense. He maintained two senses—historical and spiritual. But he also understood that the spiritual sense may be distinguished further into tropological, allegorical, and anagogical sub-senses. Gregory the Great apparently continued in Cassian’s footsteps. Henri De Lubac, Stanglin notes, “calls Gregory an ‘expert’ in the four senses, ‘one of the principal initiators and one of the greatest patrons of the medieval doctrine of the fourfold sense.’” (95)

Chapter four isn’t nearly as extensive as it could be since it deals with a lengthy period of Christian history. For this reason, Stanglin is not overly specific. Instead, he hits the wavetops of medieval exegetical history. He helpfully notes the major shift in exegetical practice resulting from scholasticism, where biblical commentary and the church’s theoretical discussions make for an influential distinction between the sacred page (sacra pagina) and the church’s sacred teaching (sacra doctrina). He includes a section on Thomas Aquinas, concerning whom he makes a rather unexpected (for some) observation:

Stanglin concludes chapter four with Nicholas of Lyra and, lastly, some principles of medieval exegesis, which include: further systematizing, quadriga and its controls, emphasis on the literal sense, academic setting, and exegesis & theology. (109-111)

Chapters five and six are the last two chapters in part one of the book. Here, Stanglin covers modern exegesis along with historical-critical exegesis. Regarding modern exegesis in chapter five, Stanglin characterizes the debate between Protestants and Roman Catholics as follows:

Those who emphasized biblical obscurity the most also tended to stress the role of external biblical interpretation and the need to supplement Scripture with church tradition. Specifically, the Roman Church’s insistence on the need for the teaching magisterium (ultimately vested in the papacy) to step in and interpret Scripture was a corollary to its claim of biblical obscurity. Thus again the Council of Trent declared: “No one… shall dare to interpret the sacred scriptures either by twisting its text to his individual meaning in opposition to that which has been and is held by holy mother church, whose function is to pass judgment on the true meaning and interpretation of the sacred scriptures.” (129)

Contrary to a modern take of the Reformation, the divide between Protestant and Catholic was not anti-tradition versus tradition. It was between tradition as a ministerially helpful guide and source of personal accountability versus tradition as decided by a specific institution being forcefully imposed upon the general public through tyrannical governmental means. Moreover, the Protestant Reformed use of tradition did not, nor does it currently, presuppose the natural obscurity of the Scriptures but the sinful tendencies of the individual reader. Of the Protestant Reformed, Stanglin writes:

Between the two extremes of Tridentine Catholicism and Radical Reform fell most of mainstream Protestantism, which, against the former, stressed perspicuity as a way to counter the Roman Catholic attempt to regulate biblical interpretation but, against the latter, also saw the benefit of church tradition as a lens for biblical interpretation. (131)

John Calvin is a hinge-point in the turn of the exegetical tide. Stanglin makes a stunning observation when he says:

Calvin goes on to say that it is indeed collective humanity, presumably the church, who will conquer the serpent, which he does associate more directly with Satan, and that it is certainly by Christ that humanity conquers Satan. But Calvin explicitly denies the association between the woman’s seed and Christ; the reference is to humanity in general. (134)

For Calvin, the seed of the woman in Genesis 3:15 is not Christ, but those for whom Christ dies, i.e. the church (Eph. 5:25). To reach this conclusion, Calvin “appeals to grammar, a philological reason, for dismissing Christ as the referent of seed.” (134) While Calvin is certainly no modernist per se, various emphases in Calvin may have paved the way for what is now known as modern exegesis. Modern exegesis eventually gives rise to the historical-critical method through several philosophical shifts. One of those shifts came in the form of Remonstrant thinkers Simon Episcopius (1583-1643) and Etienne de Coucelles (1586-1659). (156) Stanglin notes that, “For Episcopius, the reading and understanding of Scripture was not necessarily a spiritual exercise, but a rational one.” (157)

The last two chapters close the book by reviewing the extent of the differences between exegetical approaches, unbridled allegorization along with unbridled historical criticism. It finishes with a discussion on exegetical controls. Controlling the spiritual sense are the sensus literalis, the analogia scripturae, and the analogia fidei. (205-206) Controlling the literal sense is the spiritual sense, the analogia scripturae, and humility. (207-209) The last chapter looks at a way forward through retrieval exegesis, literal-spiritual exegesis, and applies these considerations to various texts as case studies.

Overall, The Letter and Spirit of Biblical Interpretation is an extremely helpful book. The most helpful part is the way in which Stanglin engages the historical approaches to biblical interpretation. The last part of the book is not especially necessary. The last chapter might be summarized as “the way forward is the way back.” Stanglin doesn’t bring anything especially new to the table. And this turns out to be a refreshing strength of the book. The overall point seems to be the exegetical continuity through the history of the church, especially when the pre-modern era is considered. Christians must return to pre-modern exegesis, and Stanglin’s book is a very helpful first step for anyone who senses the need to do so.