The Creator-Creature Distinction & the Doctrine of Scripture 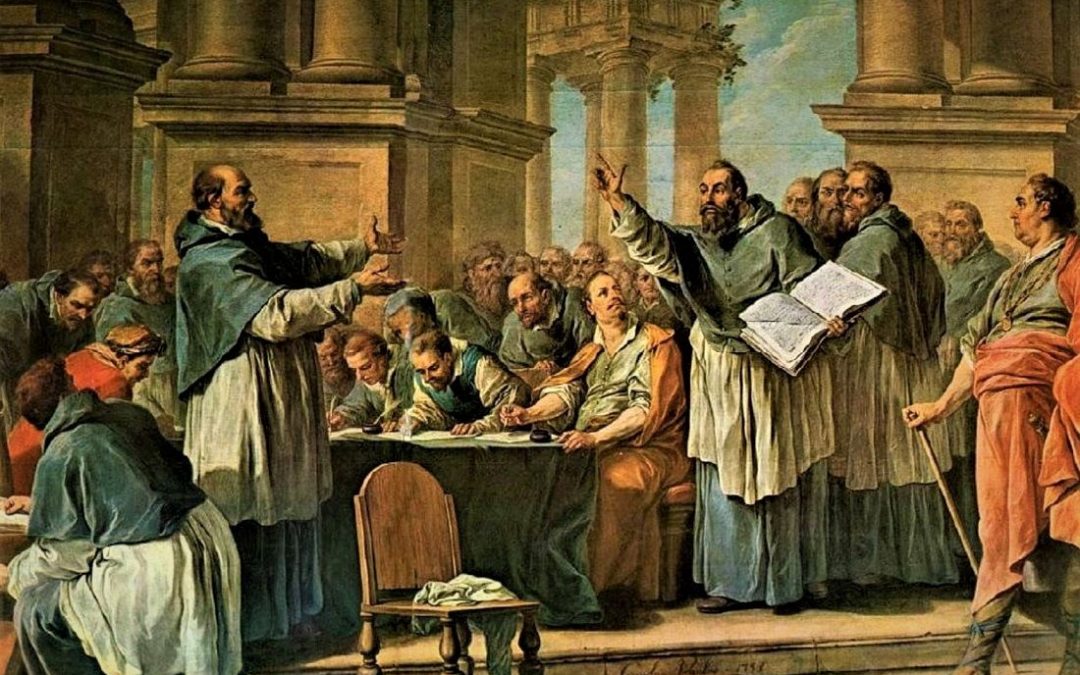 Though the three most influential Reformed confessions (Westminster, Savoy, 2LCF) begin with Scripture, it may surprise the reader to learn that neither confession begins with Scripture as a stand-alone authority. In contemporary discussion revolving around the doctrine of sola Scriptura, too often is the authority of God mixed up with the authority of Scripture. Unwitting or not, the consequence of such a confusion not only insinuates Scripture stands alone as a non-derivative source of knowledge, but it also obscures the influence of theology proper in accounting for the nature of God’s Word. God’s Word is authoritative precisely because it derives from the chief Authority, God Himself. But if Scripture is unhinged from its divine cause, then its very nature falls into question. Inevitably, we begin to subject Scripture and its meaning to various other prejudgments rather than understanding the doctrine of God as the seat and determining agent of what Scripture is.

The current fight for sola Scriptura appears not to be a fight for that doctrine classically understood, but a fight for a particular modern understanding which unwittingly blurs the Creator-creature distinction. Is Scripture creature? If it is, it has a Creator and thus must be understood in light of that Creator. Is Scripture not creature? Well, then, it would be Creator (and we will go ahead and assume this option is off-limits to all of us). Divorced from a robust theology proper, our doctrine of Scripture will slowly but surely erode. If Scripture is caused, then it must be viewed in light of its cause. If we perceive it to be uncaused, with no determining ontology (God) in the background, then it becomes anybody’s wax nose. If there is no immutable cause, then why think the meaning of Scripture is anything but fluid?

At this point, it would be helpful to note that the Second London Confession (1677) explicitly grounds the doctrine of Scripture in God Himself. It reads:

The authority of the Holy Scripture, for which it ought to be believed, dependeth not upon the testimony of any man or church, but wholly upon God (who is truth itself), the author thereof; therefore it is to be received because it is the Word of God (1.4).

Noteworthy in this paragraph is the transfer of Scripture from the hands of men (or any church) into the hands of God Himself. The negative influence of the Papacy is, of course, behind this paragraph more than any other prevalent institution during the 17th century. Perhaps the church of England, controlled as it were by the monarch, falls within its purview as well.

The central detail is the sufficient reason for why the Scripture ought to be received, that is, because it proceeds from God. The explanation for why we ought to receive Scripture is not the creature but the Creator. The explanation of Scripture’s authority and thus our obligation to receive it is found outside Scripture itself, namely in the God who authored it. And though human institutions may serve as a means to increase our interest in and appreciation of Scripture (cf. 1.5), the sufficient reason for receiving Scripture is its divine Author.

Because God is the cause of Scripture, we are automatically summoned toward a theological interpretation of it. All texts must be interpreted in light of the One who inspired them. Not a single biblical text stands in isolation from its divine Author. Moreover, there is no consideration of a single text in isolation from the context of all the other texts. Knowledge of God, therefore, will shape how we understand the shape of the biblical canon and its particulars. This knowledge comes from two distinct places.

First, nature bears the inescapable fruits of divine knowledge such that all people know God. Genesis 1:1 resonates even with the first-time Bible-reader because they have been created with the habitus to know God. More than this, throughout the course of their lives, they have discerned Him through His works (Rom. 1:18-20). Hence, Francis Turretin enlists natural theology as a preparatory help in one’s approach to revealed theology. For Turretin, natural theology is useful, “as a subjective condition in man for the admission of the light of grace because God does not appeal to brutes and stocks, but to rational creatures.”[1]

More pertinent to our purpose, however, is the question of how to prioritize theological data derived from Scripture, and how the clearest parts of Scripture illuminate obscure passages. The Second London reads, “The infallible rule of interpretation of Scripture is the Scripture itself; and therefore when there is a question about the true and full sense of any Scripture (which is not manifold, but one), it must be searched by other places that speak more clearly (1.9).” Clearer texts help us to understand less clear texts. Similarly, the divine cause of Scripture should temper our understanding of the creaturely language utilized by Scripture. Texts about the creature should not determine the meaning of texts about the Creator.

This is not to say God’s works as recorded in Scripture teach us nothing about God. Certainly, God’s works reveal God to us. But in spite of God’s works acting as a medium of divine revelation, we must understand that neither these works nor our apprehension of them condition God as He is in Himself in any way. As Dr. Richard Barcellos notes, “Though we learn of God in the economy, God’s external or outer works, we cannot account properly for those works without a theology of the One who works prior to accounting for them.”[2] Quoting Dr. John Webster, he writes, “God’s outer works are most fully understood as loving and purposive when set against the background of his utter sufficiency—against the fact that no external operation or relation can constitute or augment his life…”[3] And finally, Barcellos helpfully observes, “Without allowing first place to theology proper, we cannot make sense of the cosmological assertions of Scripture, nor, in particular, its anthropomorphic language pertaining to divine action…”[4]

Divine sufficiency accounts of Scriptural sufficiency. Apart from distinguishing between the ontology of the Creator and the ontology of the creature, throughout our Scriptural exegesis, our Scriptural exegesis cannot be expected to either yield or preserve a consistent Creator-creature distinction. This is why Biblicist accounts of Scriptural meaning tend toward numerous forms of heresy—from pantheism to patripassianism to Arianism. On a consistent Biblicist hermeneutics, nothing should be allowed to influence biblical interpretation, not even God Himself who is the very Author of the Bible. On this account, the creature will inevitably have priority, and God will slowly but surely be recrafted into man’s image instead of the other way around.

The Creator-creature distinction is that in light of which we ought to read Scripture. If our exegesis yields conclusions which effectively drag God into His economy, we should retool our exegetical approach in order to avoid such a miscalculation. Scripture must be understood in light of its Author. And though Scripture reveals its Author to us, it also reveals His works. Biblical revelation of God’s works must be tempered by biblical revelation of God Himself. This theological interpretation will not only preserve theology proper, but it will preserve the integrity and objectivity of Scripture and its purpose. Moreover, it will protect us from ourselves. If left to ourselves, we would perceive Scripture to be a wax nose. But if accountable to Father, Son, and Holy Spirit in our biblical interpretation, seeing all of Scripture in light of its divine cause, we will be led to uphold an orthodox doctrine of Scripture as well.